I'm hoping to have my comic strip book, "Cavalcade of the Magnetic Skeleton," out by the end of the year.  Here's a sample strip: 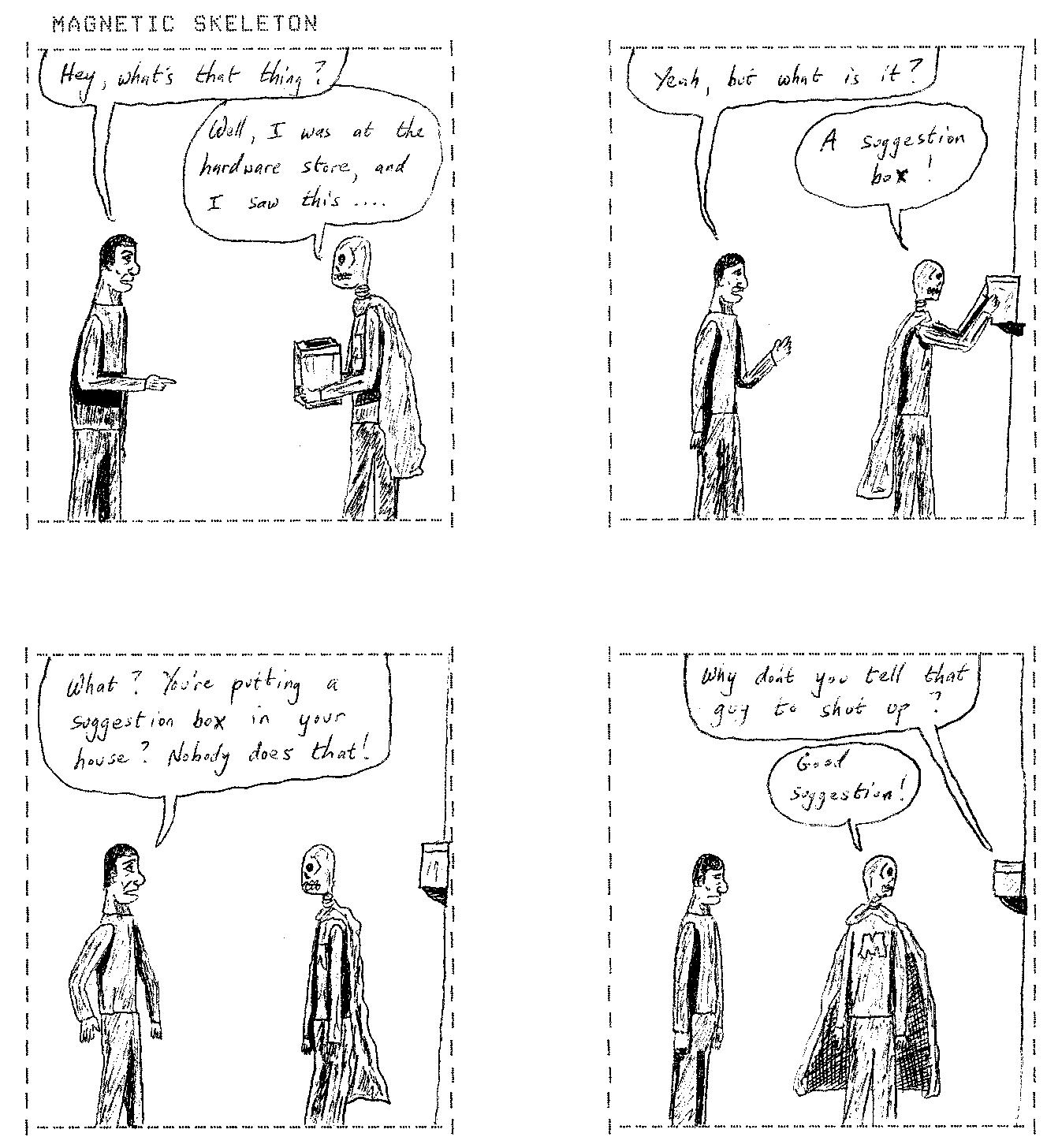 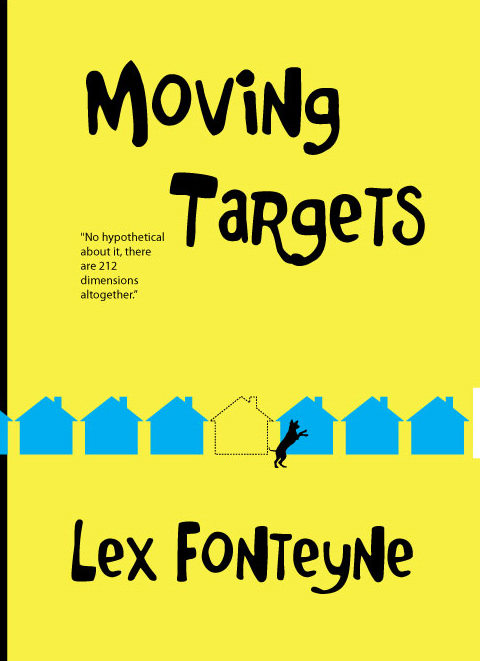 ....everywhere you look, you see people holding up books in front of a camera.

You can't get away from it.  It's an epidemic -- more prevalent than Pet Rocks in the '70s (or whenever the hell that was), more in-your-face than Gilbert Gottfried's Acne Cream ©, more ubiquitous (I don't care if you don't know it, go look it up) than photos of drunken Britney Spears in last month's Enquirer -- it's everywhere.

I don't have any answers.  If I did, I wouldn't have wasted three paragraphs on the drivel above.  But I did, so that should tell you something.  It tells me something, it tells me I'm having  slow day and need to get back to work on "Moving Targets" already.

And I will.  Eventually.

And thanks to Wade and Emily from Otaku Hobbies in Schererville, Indiana (my absolute favorite collectibles store in the entire universe!) for indulging me in my silly, misguided attempt at self-promotion.  They're nice people and they treat their customers disturbingly well!

The pics came out bigger and blurrier than I thought, but that's OK.  I think the point I wanted to make is clear, regardless -- the point being that I need to learn how to use a camera.  Oooooops.

Thanks again to Wade and Emily! 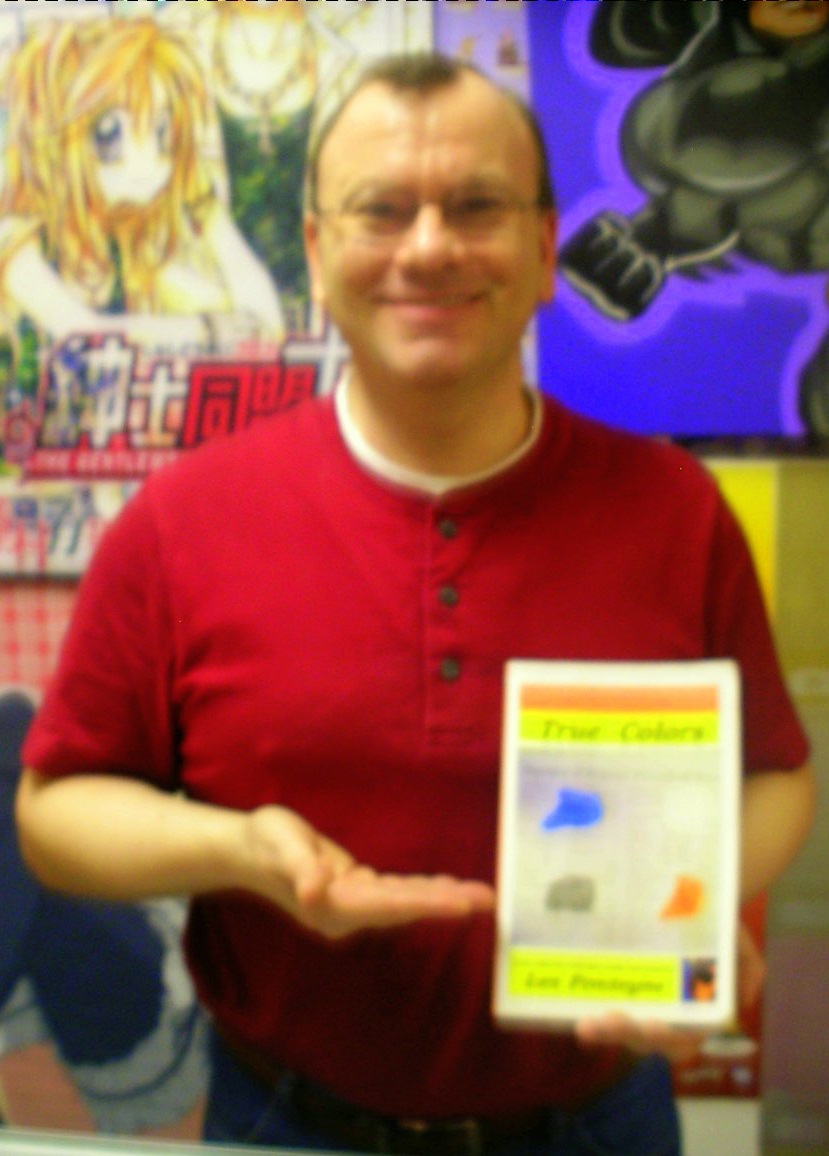 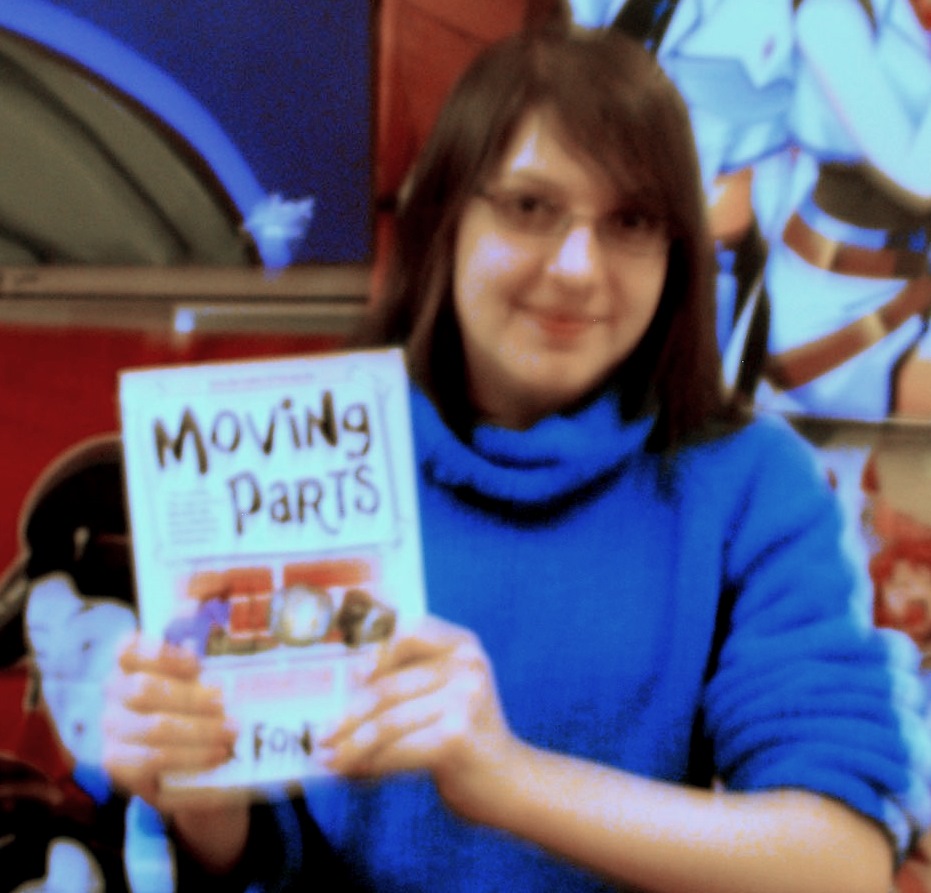 Latest News, So To Speak

Just wanted to post a little note here -- I've been working on "Moving Targets" again, and I'm hoping for a publication date of April, 2011.  Part of this is really just tradition -- "Moving Day" came out on April 1, 2008, and "True Colors" came out on April 1, 2010, so maybe I should shoot for the April Fool's Day release with everything!

I've also been working on "Ganzedi," which is a prequel to the whole MD storyline -- it's about who stole the water from Xavla, and why, and what led up to it.  One of the main characters turns out to be someone who has already appeared in some of the stories, but that's all I'm going to say for now.  There are plenty of clues already!

So, if I can get those 2 out in 2011, and maybe the poetry book (I'm thinking a fairly slim volume, about the page count of the dating site book, for $8.99 -- tentatively called "Moose In A Flight Simulator"), that'll be a productive year.

Down the road, I'm still planning the "Backenfort Anthology," and maybe even a book of my photos.

And I've been talking to someone about the comic strip book, too, although that's going to depend pretty much on whether we can transfer the drawings into an electronic form that actually works.  I don't have much experience with scanners....if it works out as I'm hoping, this will be a larger page size because of the size of the strips themselves on their current paper -- probably about the size of a standard comic shop trade paperback, whatever that is in inches.

That one is tentatively titled "Cavalcade of the Magnetic Skeleton."  I'll have to write an intro and maybe do a few new strips for it -- the 140 or so existing strips were all done in the mid-90s -- but I think it would be fun to see it in book form.  I even made a bogus set of bubblegum cards for it.

The New Book, Such As It Is

July 20, 2010 -- You heard it here first, probably! My next book, "Lex Fonteyne's Ultimate Guide to Internet Dating," has just been sent to the publisher! Give it a week or so and it will be available on Amazon along with the rest of whatever it was I wrote earlier....!

Spent some time today working on another possible entry in the "Moving Day" saga -- this one is called "Xavla," and if you're familiar with the story so  far, you know that Xavla is the name of the planet where the Neptunians originally came from.

(It's also their word for "water," but that's another matter!)

I mentioned something in "Perfectly Frank" to the effect that N-trac had figured out a way for people to actually go to Xavla, even though it's in a completely different universe.  Turns out this is not quite as difficult as it would initially appear.

Basically, what I'm writing now is a sort of Xavlan history (as told by one of their own) interspersed with chapters about Zed and his role in the whole thing.  I think it's time to get some stuff out there about the horse standing  in black grass, and why this imagery is so  prevalent in the minds of some of the characters in the backstory.... 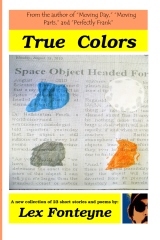 April 1, 2010 -- The "True Colors" proof copy arrived this morning; I've examined it and approved it, and it should be up on Amazon any time now!

March 25, 2010 --  I sent the PDFs for "True Colors" to  the publisher today.  They have to review it and make sure there aren't any problems, and then I get a proof copy.  Once I approve that, it gets published and goes into their catalog.

While I was putzing around this afternoon, I set up an Author Page on Amazon.  I never even knew they had that option until today!

Apparently, it takes a few days for them to  set it all up, but I should have that page up in the very near future.  Can't hurt.

The Story of Oton

People ask where I get my character names from.  Sometimes I just use the  names of people I know, and just  alter them a little for legal reasons!  Other times, I think of what the character might look like and then try to come up with a name that fits the image I see.

Teresa in Moving Day and Lyndsey in True Colors are both named after real people,  Melissa Panadecker in Perfectly Frank is named after my friend Melissa from Mingle; I thought making her character the granddaughter of the original Mr. Backenfort was a nifty (albeit not really necessary) tie-in.

But what about Oton, the Xavlan/Neptunian mastermind behind the whole Moving Day oddity?  Where did his name come from?

Well, I've never told anyone this, but here's the story.

There used to be an Arby's on Sibley Blvd. in Dolton, Illinois.  I don't know whether business went bad, or if the guy just decided to retire, or what, but he finally closed it down.  He left a message on the sign, though.  It said THANK YOU DOLTON.

Several years passed, and the sign was left untended.  There was a day when a friend and I were driving down Sibley; now the sign read THANK YOU OTON.  The D and the L had been stolen, or had fallen off, or whatever.

My friend said, "Sounds like some ancient god no one knows about anymore.  Or maybe an alien."

When I was writing Moving Day, I needed a name for an alien character.  I was originally going to call him Vilo (if you're read Moving Parts, you'll have noticed that I eventually did use the name Vilo for a different alien), but then I remembered THANK YOU OTON.

I always used to think that writing was just about writing -- you come up with a story, you write it down, the end.

Well, it doesn't work that way in real life.

The past few days, I've been doing some clean-up on the text and cover for "True Colors."  There are a billion little things you have to look at, fix, edit, take care of, revise, etc.

For example -- spellcheck.  Nice feature but it doesn't catch everything, because sometimes errors don't involve misspellings!  I had a paragraph in "Palindrome" that was supposed to start with "Then Jenny...." but I somehow forgot the "N" in "then" and it came out "The Jenny," which doesn't even make sense.  Lucky I caught that one.

And I always have problems with paragraph spacing.  I like to keep one blank row between paragraphs.  It's easier on the eyes and makes for a smoother read.  But, inevitably, while I'm going through the manuscript, I find places where two paragraphs are stuck together, or where there are too many blank rows between them.  Then I have to fix those.

On the cover for "True Colors," I used the basic template from the "Perfectly Frank" cover because it worked well the last time.  I added the pics, the new text, some miscellaneous odds and ends, and just before saving it as a PDF, I realized I hadn't changed the width of the spine.

This would have been a problem because "Frank" was 442 pages and the new one is only about 280.  So the actual cover size (length) was too big for the new book, and I had to adjust the spine width accordingly.

Some day, I hope to be rich enough and famous enough that I can hire someone to do all the technical stuff for me!  Until then, I'll just have to  muddle through....

Start a Free Blog at Webs.com